As those of you who frequent Protagonize mayÂ know, roleplaying can be a valuable tool for writing stories that have a larger number of characters. With a single author taking on the role of one of the characters, you can give each one a much stronger sense of having their own voice and personality.

However, roleplaying doesn’t just stop at the writers desk, roleplaying games are a huge industry both on the tabletop and in the computer game industry. Tabletop games in particular are built specifically for telling stories together, with some games making story telling the primary focus (as opposed to combat and tactics, that also make up a large portion of some RPGs). With both kinds of roleplaying ultimately being about telling stories, you shouldn’t be surprised that there are a lot of roleplaying games and tools out there which can really help serve you as a writer – and are just fun to play too!

Chuck Wendig, a writer and gamer makes a good case for why writers should play roleplaying games. This blog post is more about the specific games and tools from roleplaying I’ve found useful and why, but any game and any roleplaying utility can be useful to writers, so I encourage you to get involved with the hobby!

Most games are built around a central theme, such as horror, or super-hero action adventures, or pulp science-fiction. Picking the right game to use for helping you write should be based on what kind of stories you want to tell. While there are a lot of ‘generic’ roleplaying systems, for helping you as a writer, those can fall a little short when you what to capitalise on genre-specific tropes. Here is a round up of a few games I’ve used before to help with writing:

Fiasco is a great, narrative-driven game with no combat mechanics and no gamemaster or adjudicator. At it’s heart, it’s about improv and prompting, with a simple dice mechanic to decide whether things go well, or badly, and who gets to make that call. Fiasco is built primarily around stories of people doing bad things for bad reasons, and how their grand plans go inevitably wrong with disastrous consequences. Films like Fargo or A Simple Plan are the kinds of stories Fiasco excels at telling and best of all, the writers of Fiasco have even written a companion for their game called The Fiasco Companion which has a chapter in using it for writing.

Each game of Fiasco is driven by options in a “playset“, a book of prompts, tropes, props and goals that define the basic conditions and setting of the story. These things are used to build connections between adjacent players at the table and after that turns go around the table. Each turn involves one or more players acting out scenes that make use of their relationship, props and goals and either ends positively or negatively, based on the game mechanics. If you haven’t checked out Fiasco, I highly recommend it and you can see a great example of it in setup and in play on the Tabletop show:

I’ve used Fiasco for coming up with inter-personal relationships, prompts and scene building when I’ve wanted to write a story involving things going terribly wrong. With the huge number of playsets available, you can use the process to write scene outlines for many different genres, though naturally the game itself is geared towards a black comedy style and if you’re writing that kind of story, you’ll gain the most benefit from it.

Next up is Fate. It’s easy to think of Fate as a generic roleplaying system, which is one of the things I warned you about earlier. However, Fate, while it can be used across multiple genres, excels at a type and method of story telling that can really work wonders for you when you are trying to write. Fate is built very heavily around empowering narrative control. While typically Fate games will have a primary gamemaster that drives the main plot forward, players can influence the untold facts that make up the scenarios they are playing through by spending points they accrue though play. These might be as simple as a player stating that the building is on fire (which would add an aspect to the building itself, of “On Fire” for example, which the player could invoke for bonuses on tasks that would benefit from fire) to pointing out the big bad guy they are fighting has some kind of weak spot.

One of the most rewarding things about Fate though is the way characters are created and played. Characters in Fate don’t have a lot of complicated attributes like Strength and Dexterity and Constitution that govern their abilities and actions but instead use a system called ‘aspects’. Aspects are short phrases about a character that act as a sort of double-edged sword, defining something interesting that the player can draw on to get a boost to succeeding, or can be used to penalise players for acting against their nature, even going so far as for the gamemaster to compel the character towards a bad course of action which is inline with one of their aspects, giving them points to spend later.

Aspects can be anything, from objects, to catchphrases, to relationships. Some examples might include:

Aspects all tell a short story about a character, raising as many questions as they answer. They are ideally double-edged swords, for example “Daddies Girl” might mean that character can gain benefits and resources from her father, but on the downside she might be spoiled or lacking self-reliance, depending on what your own personal take is on the phrase. Equally “Tougher than old boot leather” implies a rugged, survivor, someone with scars and experience but also someone cantankerous, stubborn, rough and prickly.

The core Fate rules are completely free and I highly recommend you check them out, both for the way characters are built, but also for the mechanics that influence the rest of play, and thus how the stories form and progress as a game goes on.

Microscope is a big picture game and is incredibly useful for world-building. Instead of playing individual characters, in the game you create a timeline that could span from the creation of the universe to it’s destruction and perhaps even rebirth. One of the strengths of Microscope is that it really builds of the interplay of different players free will and benefits immensely from no pre-planning, no arranged agreements on timeline progression – basically it works best with a no-rules blank slate.

Microscope takes it’s name from the fact that you start big, at the macro level defining huge eons of time and whether they are on the whole negative or positive, then zooming in to focus on individual events and then again to focus on pivotal scenes within those events. If you want to create a rich, vibrant history for your world, playing through a game of Microscope can help make that happen. Another great thing about the game is that you can return to it at any time and keep adding detail.

I’ve used Microscope to do world-building at epic scales as well as acting on small timelines, such as a few weeks, to plot out major events and scenes of a story.

As well as games, there are a bunch of gaming and improv tools you can use to really help you with inspiration whilst writing. I’ve made use of Daniel Solis’ Writer’s Dice before, a simple series of dice with ifs, ands, and buts to throw complications into your plot ideas or your characters actions. Another series of dice I’ve not used before but quite like the look of are Rory’s Story Cubes, a series of dice with simple icons on each side, designed to inspire you to improvise all sorts of stories and situations. 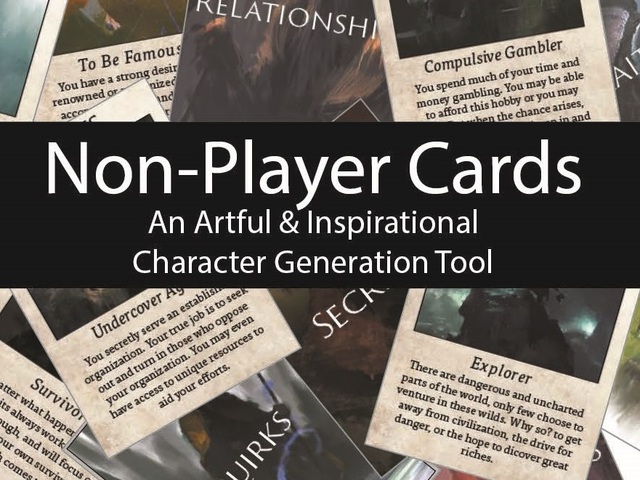 Finally, this brings me to a project of my own – together with a friend, I’ve created my own story inspiration tool, a deck of 300 cards designed to help you come up with ideas for characters in your games or your stories. Playing on the term NPC we called them Non-Player Cards, and they cover 8 categories including relationships, names, professions, physical traits and personality quirks.

By combining cards, you can quickly and easily get a visual and tactile reference of details for a character. Each card also has it’s own individual artwork, to aid in providing additional fuel for your imagination beyond the names and descriptions on each card. The basic deck of 300 is designed to be fairly generic with a slight leaning towards the fantasy genre, but if we are successful we plan on releasing a series of booster decks themed around specific genres and settings, from contemporary modern day to science-fiction, horror and high-fantasy. You can even combine the decks for your modern-day fantasy story needs, or that sci-fi horror you’ve been struggling with.

I’m really excited about Non-Player Cards and how they can change they way you come up with characters. I hope you are too! You can learn more about the project and keep up to date with it’s development over at our kickstarter page.

5 Responses to Roleplaying for Writing